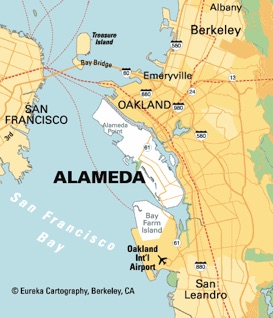 All about Alameda, ‘The Island City’

The island of Alameda, which lies on the Eastern side of San Francisco Bay, was once a peninsula connected by marshlands to the East Bay coastal plains. The sunnier Bay Shore location, nestled away from the fog belt, sheltered by live oak groves, was named “Encinal” originally and gained recognition as a desirable site for farms and truck gardens with its fertile soil, water, and favorable climatic conditions.

The name “Alameda” was adopted in 1872, referring to the groves or lanes of poplar trees. By the twentieth century, Alameda had been typecast as a “bedroom city” with residential areas cropping up, due in part to the desirable flow of trolley, train, and ferry transportation services. In today’s Alameda, housing retains much of its old world dignity with many examples of gracious and lovely single-family homes and a mix of new complexes and modern town homes. This is particularly true of the sand fill areas and the extension of Bay Farm into what we now call Harbor Bay.

The transformation of the business and retail climate in the city has brought a new “Silicon Island” perspective that has added to the economic and commercial mix. Alameda is now reaching its full residential capacity except for the conversion of some previous industrial sites and the newly converted Alameda Naval Air Station, now known as Alameda Point.

The challenge remains on how to make the best use of this change so as to capture the best of the old and integrate the options of the future in a way that respects what Alameda has been and recognizes the glory that comes with diversity. The Alameda Holiday Home Tour retains its position as Alameda’s premier event for showing off the best of why we call this home!